We are proud to announce that Integration Manager now supports Mule ESB. With future releases it will be possible to monitor applications and endpoints in Mule. It will also be possible to track messages and context within Mule applications.

The next two pictures show an example of a monitor view of Mule. In the first one everything is working as expected but in the second one an application is indicating an error. In this case the application has been stopped. 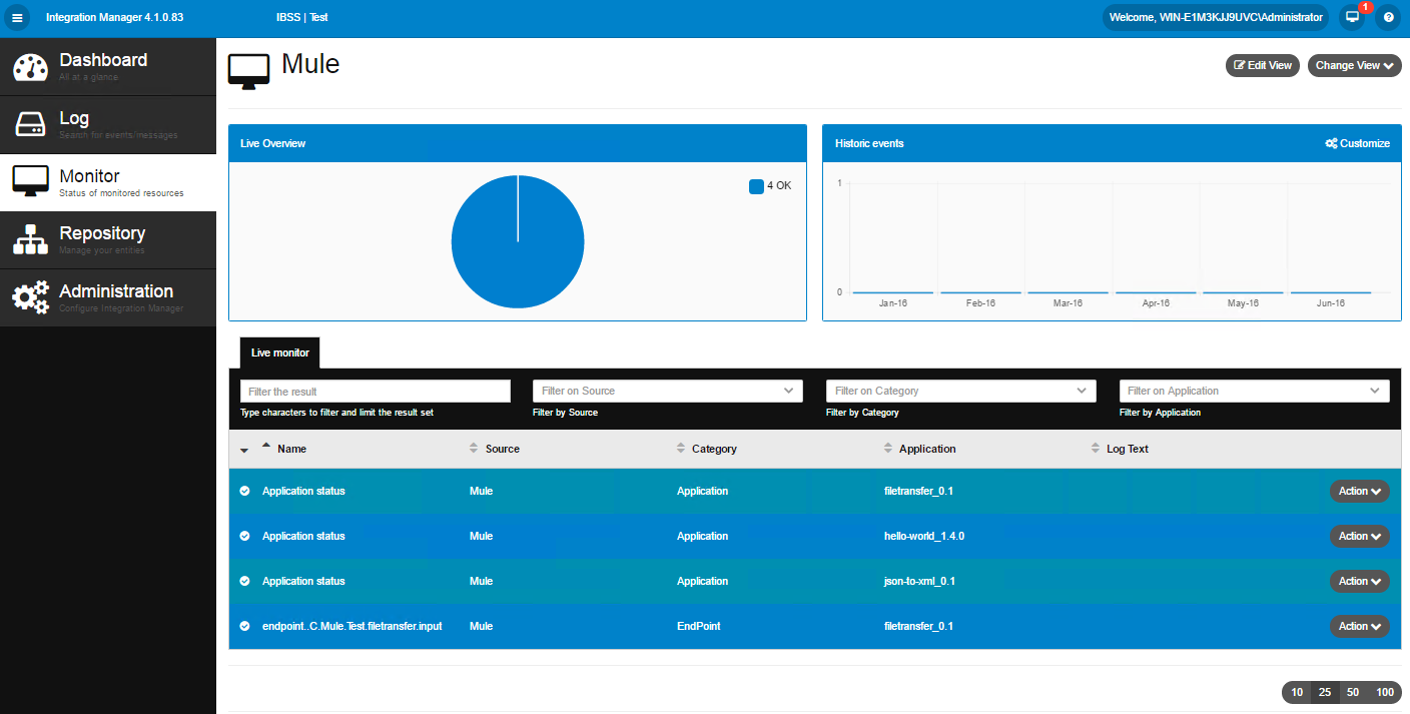 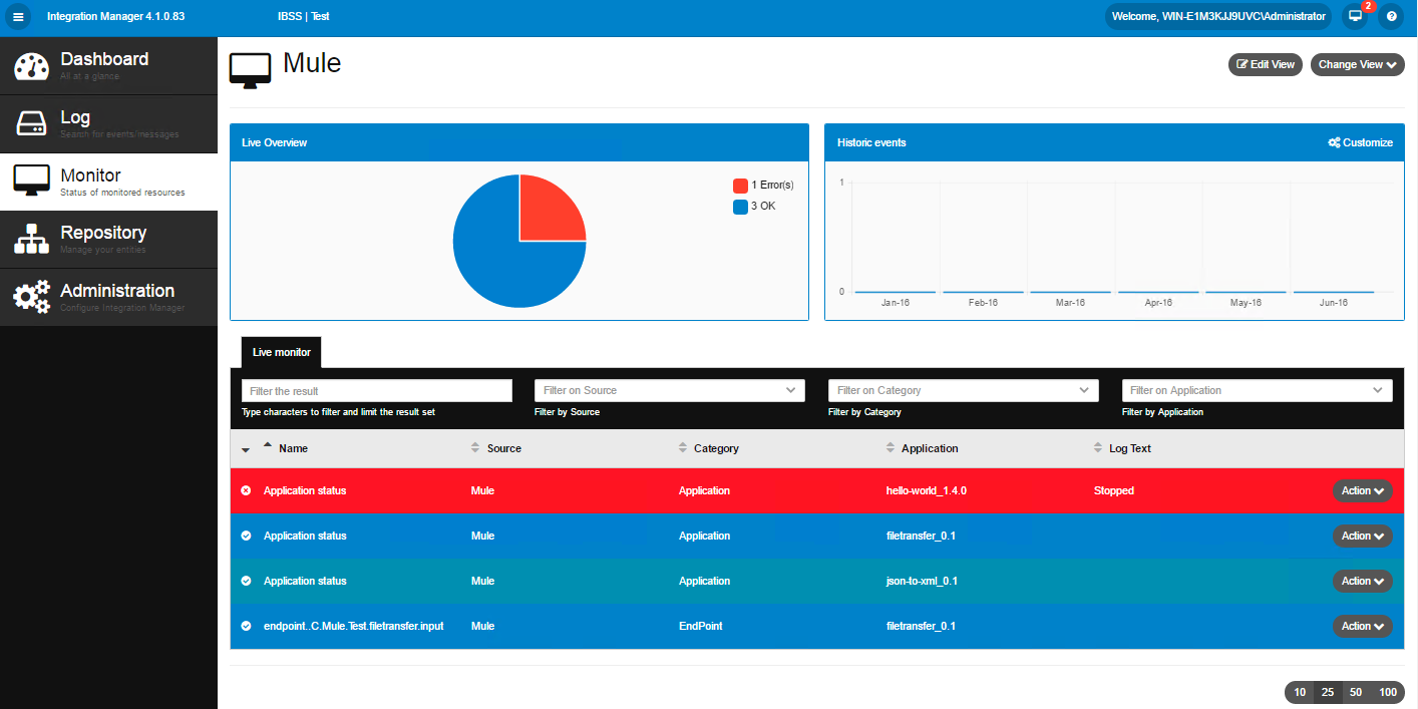 If the monitor view is configured to allow actions it will be possible to start and stop the monitored Mule applications and endpoints. Just click on the action button and select start or stop.

Integration Manager receives the tracked messages (body and context) by using the Log component in Mule.

After the messages has been processed by Integration Manager the will be shown in the web client.

The context of the received message. 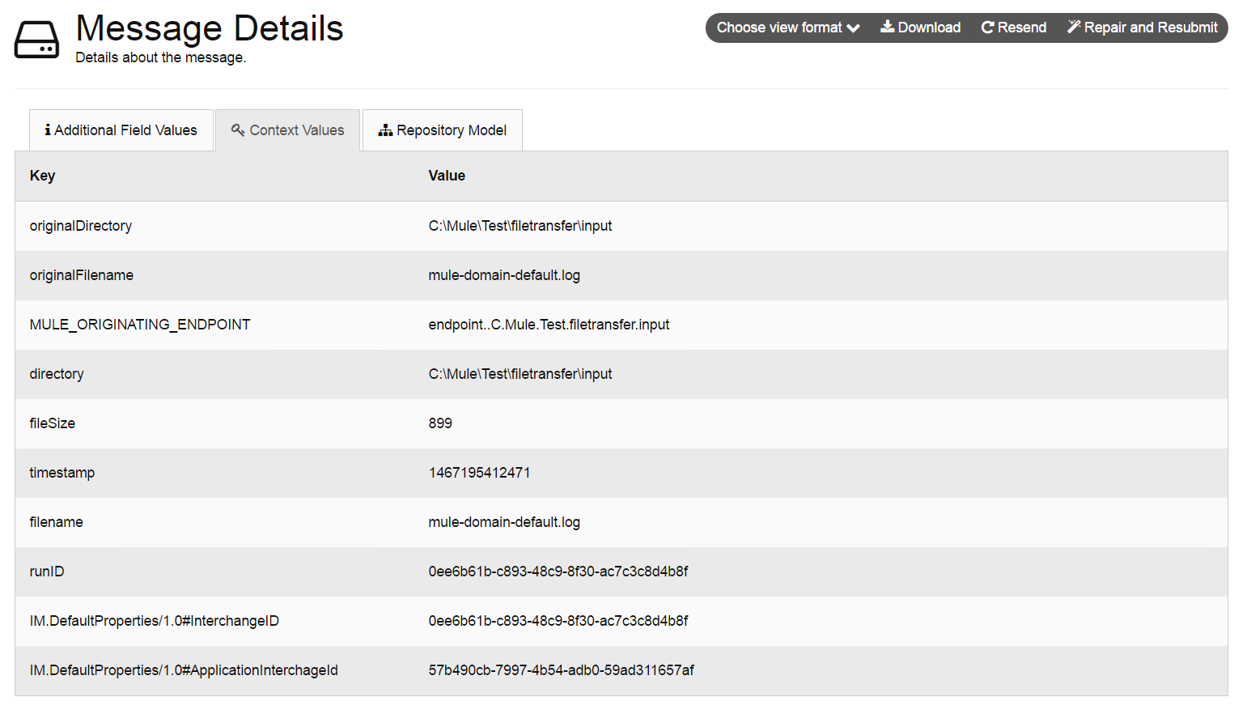 The number of monitor agents is getting bigger and bigger enabling you to monitor even more systems, services, platforms and applications. Not only are we working on supporting even more integration platforms, such as Mule or iCore, … we also work on integrating more with the Microsoft Azure platform, enabling you to monitor your cloud-based & hybrid integrations with ease – centralizing message logging and monitoring into your Integration Manager platform and having it all in one place.

We are currently supporting the following Microsoft Azure services:

Guru Venkataraman and Mark Mortimore from Microsoft held a presentation about the critical mission to use cloud capabilities on Microsoft Azure for building system integrations during the Microsoft Ignite event in Chicago. We have been chosen to be one of the partners for showing the audience the capabilities Microsoft offers its partners and customers in the new service – App Services. In one of their demos they decided to show how you can extend your Logic Apps with monitoring and logging capabilities by using one of our products – Integration Manager. See the whole recorded session by clicking here.

We are proud to announce that Integration Manager now fully supports logging all events/messages and monitoring Microsoft Azure Logic Apps.

Integration Manager’s Log and Monitor Agent for Microsoft Azure Logic Apps will log not only that an operation has been executed, it will also log the input and output data of all actions being executed within the different Logic Apps. All events being logged contain a correlation id as a contextual value which easily can be used as a Search Field to group the different events, enabling you to see the whole chain of events and get it all in one place.

The new agent for logging and monitoring for Microsoft Azure Logic Apps automatically keeps track of all Logic Apps published in your Azure subscription. Not only are the statuses of your Logic Apps being monitored, even the different connectors are being monitored – giving you the insight and control you need in order for you to know that everything is in place and running according for your business to work.

Want to see a demo and want to learn more? Please contact us at info@integrationsoftware.se and we will set up an online meeting and show you how easy you can get in control and retrieve the insight you need!

By enabling your app services to use on-premise resources you can together with Integration Manager monitor even more!

If you follow tutorials / documentations on how to get started with Hybrid Connections you learn that you have to have a BizTalk Services instance in Azure, this instance can have one or several hybrid connections (see pricing of BizTalk Services to learn more about limitations). While setting up and configuring your hybrid connection, it requires you to install a service/agent on your on-premise machine called the Hybrid Connection Manager. Installing the agent sometimes works and sometimes not.

We came across a file not found error during installation. Newtonsoft.Json file could not be found and therefore the installer throws an exception stating “Could not load file or assembly Newtonsoft.json…”.

Unfortunately there is no post from Microsoft about it, there are some forum posts regarding this error message, but we could not find a proper blog post about how to resolve the problem.

We solved the issue by installing the proper version of the Newtonsoft.Json.dll into the Global Assembly Cache (GAC). The error message of the installer tells you which version you need, which in our case was version 4.5.x.x. We downloaded the dll with version 4.5.11 from the Newtonsoft.json Github project downloads and installed it into the GAC. Installing the DLL into the GAC can be done by using the Developer Command Prompt for Visual Studio and executing the gacutil.exe with the proper parameters.

The command prompt will show a message that the assembly has successfully been added to the GAC (see screenshot 1). 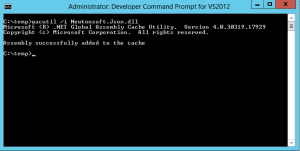 When you are done, restart the installer of the Hybrid Connection Manager and you should be good to go (if there is not another bug hidden somewhere along the installation!).

We hope this helps you solving issues during the installation of the Hybrid Connection Manager!

With the release of Logic Apps, Microsoft also releases the Workflow Management API. An API to use for getting access to the workflow of your logic apps allowing you to easily enable, disable workflows, get the status, etc.

Microsoft’s documentation of the API is incomplete and not clear which of the API calls are working in the current release of the API.

This API is allowing you to monitor Logic Apps with Integration Manager’s monitoring feature!

According to the documentation the URI to the calls is:

This is wrong of course, you can clearly see that something is missing in the beginning of the URI.

It’s the URI to the region of the Logic App. For example: northeurope.logic.azure.com. The URI to call the API should look like this (example below):

Problem #2: Not all of the API calls documented are working (yet)

Problem #3: There is no documentation about authenticating against the API

For your interest, the authentication type supported is Basic. A username is created on logic app create which is ‘default‘ and the password to use is the primary key (not sure if the secondary works as well) which you can find in the logic apps properties blade of the Azure portal (see screenshot 1). 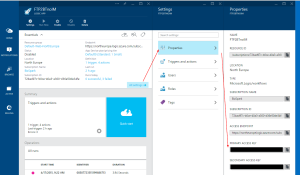 So the proper way of authenticating against the API is to send the Authorization header with your Basic username/password value – see example below:

We are proud to announce the release of two new monitor agents for Integration Manager giving you even more control and insights – Microsoft SQL Server and Web Services.

It is crucial to know when backups are not taken, jobs are not running and statements are not returning the expected result, due to the fact that this might cause business critical errors.

With this agent you can configure Integration Manager to monitor all imaginable SQL statements and their result.

Control that backups have been taken from all monitored databases. Displays the time and state of the last backup (if any).

Check the size of the files for data and log, supports warning and error threshold values.

Many systems and integrations are depending on web services, monitoring them is important! With Integration Manager’s agent for web services you can easily monitor web API’s, SOAP services and even web sites.

You monitor them by simply providing all required HTTP headers, client certificates as well as the services’ address and let the agent do its job – connecting to the service, check if the response’s HTTP status is one of the expected ones and evaluate the result of the request by using a regular expression or an XPath.

Not only can you check if the HTTP status is one of the expected ones, and not only evaluate the result by using a regular expression or an XPath, you can even monitor the response time of the request.