Microsoft has in a recent update released the possibility to provision API apps directly from the actions and triggers blade to your API app service (see Screenshot 1 below). This is an important update, since you no longer need to close the logic apps blade, add all the API apps and then go back to the Logic App. To read more about the update click here. 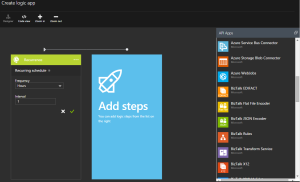 As you can see in Screenshot 1, the list of available API apps is already long and will grow and grow. In the today’s version of Logic Apps there is no possibility to search, filter and group all available API apps, making it a hard task to find the API app you need.

This would make provision the required API apps within your Logic Apps easier.

The new Azure portal is great when it comes to flexibility and customization support for the user interface or at least when it comes to the start page. You can add shortcuts to virtual machines, websites, etc. to your dashboard, as well as billing information, etc.  And this makes it interesting from a monitoring point of view, since you can add a shortcut to your virtual machine and the dashboard will then provide you with a shortcut link, as well as shows information about the state. This means that if the virtual machine is stopped – the dashboard/home page will tell you as shown below in Screenshot 1. 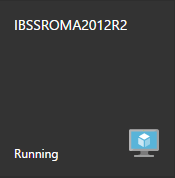 I wanted to add my Logic Apps to my dashboard to simply provide myself with useful shortcuts as well as I thought that the widget on the dashboard would then show me the state of the application itself – but no (see Screenshot 2 below). Unfortunately the new widgets provided for the logic apps do not show the state yet. 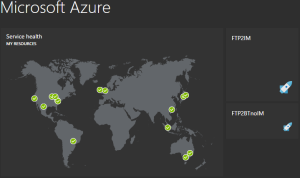 Screenshot 2 – Status of logic app not showing on home.

Integration Manager – a tool for centralizing logging and monitoring of data and systems in your system integration provides you that shows all logic apps, not only the one in your Azure directory- but all directories you configure it to log from and to monitor.

The Solution (in my/our opinion)

Working with Logic Apps is fun, but in the current version of it is kind of hard to keep track what all the different actions do. Let’s say you use the BizTalk XPath Extractor several times, because you need to extract several values from an XML file content. But take a look at Screenshot 1 below and see what it looks like.

What we would like to see is a way of commenting each action in the workflow for better understanding each action being executed. An example would be a comment field  enabling developers to explain what the action does.

Guru Venkataraman and Mark Mortimore from Microsoft held a presentation about the critical mission to use cloud capabilities on Microsoft Azure for building system integrations during the Microsoft Ignite event in Chicago. We have been chosen to be one of the partners for showing the audience the capabilities Microsoft offers its partners and customers in the new service – App Services. In one of their demos they decided to show how you can extend your Logic Apps with monitoring and logging capabilities by using one of our products – Integration Manager. See the whole recorded session by clicking here.

We are proud to announce that Integration Manager now fully supports logging all events/messages and monitoring Microsoft Azure Logic Apps.

Integration Manager’s Log and Monitor Agent for Microsoft Azure Logic Apps will log not only that an operation has been executed, it will also log the input and output data of all actions being executed within the different Logic Apps. All events being logged contain a correlation id as a contextual value which easily can be used as a Search Field to group the different events, enabling you to see the whole chain of events and get it all in one place.

The new agent for logging and monitoring for Microsoft Azure Logic Apps automatically keeps track of all Logic Apps published in your Azure subscription. Not only are the statuses of your Logic Apps being monitored, even the different connectors are being monitored – giving you the insight and control you need in order for you to know that everything is in place and running according for your business to work.

Want to see a demo and want to learn more? Please contact us at info@integrationsoftware.se and we will set up an online meeting and show you how easy you can get in control and retrieve the insight you need!

Azure App Services Series – Finding #5: Changing the order of connectors in your Logic APP not possible in designer view

Developing Logic Apps requires you to put a chain of API apps in place. This chain can of course be changed.
The reasons why this chain could be changed could be

Some of the points in the list above such as if a connector is still working or not can be monitored by Integration Manager.

The designer the current state of Logic Apps is offering does not offer drag and drop and therefore changing the order of API apps or inserting a new API app in between is not possible.

Luckily for us the designer view is not the only view available the Logic App designer offers – we also have the code view. You can achieve changing the order of API apps / connectors in your Logic App by changing the JSON workflow definition.

To learn more about the Workflow definition click here.

What we would like is of course the possibility to drag and drop the different connectors and put them in the order we want instead of needing to change the JSON workflow definition.

For systems to communicate with each other data needs to be transformed. 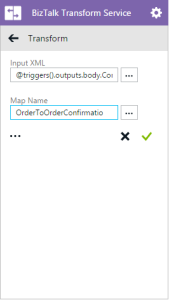 With Integration Manager we can see how the message has been transformed without needing to export the input/output files of your operation logs of your logic app (see Screenshot 3 to 5 below). 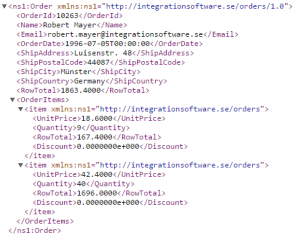 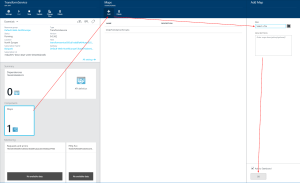 But how do we create them? In Visual Studio, but what version? The answer is 2012 – you can create a BizTalk Services map in Visual Studio 2012, not in 2013, 2015 Preview, just in 2012! In our opinion it is a miss once again here. Microsoft engages us to use the latest techniques/technologies, the latest tools, but when it comes to a certain level of details, Microsoft is just not up-to-date.

Microsoft has released an update to this issue now showing you the name of the connectors in your resource group. 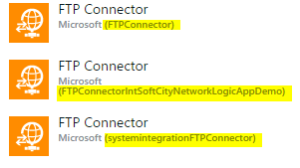 We came across a minor problem while creating and working with logic apps – which connector has which name when having the same type of connector in the current resource group.

Let us say you have a logic app that reads from one FTP Server (your internal ftp) and you need to upload the file to another FTP Server.

For this scenario we need to have two FTP Connectors in our resource group of the Logic App – in my example I have called them “FTPSourceServer” and “FTPTargetServer”.

Let’s take a look at the Logic APP triggers and action interface and see how it looks like (see screenshot 1 below). 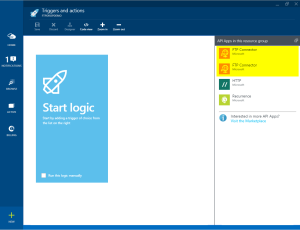 How do we know which of the FTP connectors we see is either “FTPSourceServer” or “FTPTargetServer”, by just looking at the screen shown in Screenshot 1 above?

Long answer: There is a work around! See “The Solution”.

What you can do is to simply add the first in the list to the logic and simply choose the “File Available (Read then Delete)” trigger, save the changes and then switch to “Code View” (see screenshot 2). 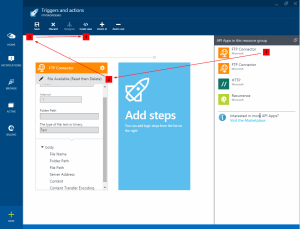 You have now switched from the “Designer” to the “Code View” showing you the JSON data the logic app needs and uses in order for your logic app to work correctly. In order to find out which of the FTP connector you just added, simply search for the “triggers” section of the JSON file and see the name of the trigger – see screenshot 3. 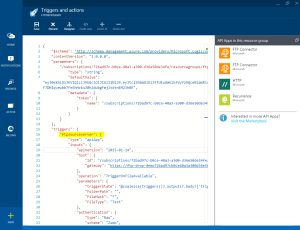 As you can see, the name of the trigger is “ftpsourceserver”, which lets me know that the first FTP connector in the list of available API apps is the one FTP connector I called “FTPSourceServer” and of course the second in the list must therefore be the one I called “FTPTargetServer”. (Could be good to know that the JSON data is case insensitive when it comes to the object names – in case you would like to create the logic app’s code by your own.)

This is of course not the best way and I am sure Microsoft’s Azure team is aware of this issue and gets fixed soon – keep in my mind that the new interface of Microsoft Azure is still in preview as well as API and logic apps!